City Hall Update City Hall is open to the public by appointment only at this time. Read On... 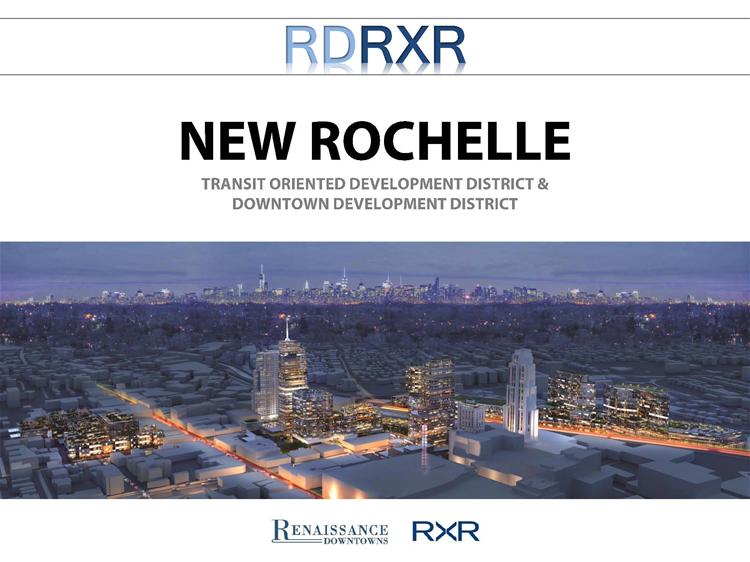 On December 8, 2015, the New Rochelle City Council unanimously approved a new zoning plan that paves the way for the most significant economic rebirth in the City’s historic downtown. The adoption of the Downtown Overlay Zone and Community Benefits Policy concludes an intensive year-long research, and community outreach process, led by the City of New Rochelle and its designated Master Developer for Downtown, RDRXR.
The new zoning provides a clear and transparent roadmap for investment to developers and property owners, while also setting design standards and community benefit requirements intended to create a thriving, attractive, and sustainable city center.  A new Fair Share Mitigation Fund will help ensure that development covers any public costs associated with growth and that taxpayers receive a net benefit. The new plan creates the possibility for a New Rochelle brimming with vibrant, yet intelligently designed new development that would impact the City throughout the 21st Century, as it permits construction of up to 12 million square feet of new development, including 2.4 million square feet of prime office space, 1 million square feet of retail, 6,370 housing units and 1,200 hotel rooms.
“This innovative development framework positions our City for success, especially combined with New Rochelle’s core assets - unrivaled location and transit connections, a talented and diverse population, and great schools, and neighborhoods.  There is no community in New York that offers a better opportunity today or a bigger upside tomorrow,” said Mayor Noam Bramson.
New Rochelle’s downtown plan reflects extensive public input, gleaned through a Crowdsourced Placemaking program with over a thousand members participating as well as multiple community meetings and two public hearings.  More than one hundred different ideas were generated for New Rochelle’s downtown, many of which were included in the Recommended Action Plan (“RAP”).
Following the approval of the RAP, the City and RDRXR completed the requirements of the State Environmental Quality Review Act (“SEQRA”), thoroughly analyzing the impacts of the redevelopment plan and providing measures to mitigate those impacts.  The results of the SEQRA review are detailed in the Final Generic Environmental Impact Statement and Findings Statement.  The completion of the SEQRA process will reduce financial and procedural impediments to future investment.
“New Rochelle has come together in support of the revitalization of our downtown,” said Development Commissioner Luiz C. Aragon “We have created the right environment for the ideal work, live and play landscape. Come to New Rochelle, we’re open for business.”
Read full release
Watch video

Through a number of studies and planning exercises, critiqued and refined with the assistance of several nationally recognized professional planning and design experts, the City has identified a set of real estate development goals and objectives it seeks to implement over the next several years.
The overarching concept for development downtown is the creation of an active, mixed-use district with convenient, safe, and pleasant access to the New Rochelle Transportation Center. This plan would incorporate the development of economically diverse housing, modern retail, commercial, office and hotel space integrated with a well-designed pedestrian friendly streetscape and by an abundance of green space.

To that end, the New Rochelle City Council unanimously approved a Master Developer Agreement (“MDA”) with RDRXR at a special council meeting on December 15, signaling the start of the largest and most significant economic development initiative in the city’s history. The goals of this effort are to: •Enhance our city’s downtown area in a way that appeals to members of our entire city and the larger region and serves as a catalyst for job creation, economic growth, private investment, and higher property values.
•Usher New Rochelle into the 21st century, while respecting our city’s history and soul, and celebrating and enhancing New Rochelle’s cultural and artistic vitality.
•Leverage and utilize New Rochelle’s unparalleled location and transit access to provide attractive housing options for young professionals, and the workforce.
•Strengthen New Rochelle’s tax base and provide a positive return to taxpayers.
•Improve our environment through green, sustainable, energy-efficient design while creating a new skyline with iconic architecture that inspires civic pride.

Since their unanimous approval as Master Developer by City Council last December, RDRXR has worked with the City and the community to co-create the Recommended Action Plan.  The RAP was presented to City Council at their special meeting on August 18.
The RAP builds on the foundation of past and planning efforts undertaken by the City relating to the downtown area and transit center, with the goal of creating a vibrant, ethnically and culturally diverse community that draws people from across New Rochelle and throughout Westchester and the wider region.
In addition to analyzing previously and newly conducted planning studies, the RAP also includes a report and analysis of stakeholder and community input received through Crowdsourced Placemaking (CSPM) process, as well as recommendations for zoning code amendments and other complementary programs and investments.
The RAP envisions a downtown and transit area that would include a healthy and exciting mix of housing options, retail, commercial, office, hotel space, as well as community and cultural facilities.  In developing the plan, RDRXR and the City studied the projected market opportunities in the area, based on forecast economic and demographic trends. The public outreach process has been among the City's most comprehensive, with over a thousand members engaged online and dozens of meetings of meetings across the city attended by hundreds of residents and stakeholders.
The City and RDRXR will now focus on completing the requirements of the New York State Environmental Quality Review Act, as a part of which a draft generic environmental impact statement will be presented to the City Council in mid-September.  Thereafter, the City Council will be asked to consider the plan for formal approval and adoption.
Recommended Action Plan

The Final Generic Environmental Impact Statement was accepted as complete by Council on November 10. A public hearing was held on Tuesday, November 24 at 7:30 PM.

The City of New Rochelle and its development RDRXR have been honored with the prestigious William H. Whyte planning award from the New York Metro Chapter of the American Planning Association, recognizing creativity and ingenuity in planning.
The Association lauded the Recommended Action Plan presented to the City by RDRXR, noting the "in-depth reviews and integration of historic cultural assets, studied marketed opportunities and thoughtful zoning review", as well as the public engagement undertaken to achieve holistic, sustainable development. The award was formally presented in Manhattan on October 30.

Through a number of studies and planning exercises, critiqued and refined with the assistance of several nationally recognized professional planning and design experts, the City has identified a set of real estate development goals and objectives it seeks to implement over the next several years.